Nail fungus (Onychomycosis) is a fungal infection of the nail and nail bed. This should be differentiated from athlete’s foot or skin fungus in which the fungus infects the skin on the feet. About half of the nail disorders occur as a result of the fungal infection. Therefore, the infection is much more prevalent under sick or deformed toenails.

Nail infection is usually very persistent and the treatment is complicated. In addition, Toenail Fungus Infections may cause embarrassment because of the deformed and ugly nails. Toenail Fungus signs include a thickened nail plate or nail bed, yellow discoloration of the nails, foot pain and bad foot odor caused by the fungal debris under the nail. The nails often become thick and fragile and can detach from the nail bed or the skin under the nail. 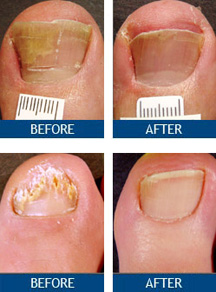 Nail fungus usually starts at the distal end of the fingernail or toenail. The infection then spreads to the proximal end of the nail towards the nail bed. Finally, the fungal infection spreads to other toenails, but rarely infects all of them. Candida and Dermatophytes are the most common fungi causing nail infections. But mostly, the combination of fungi and a moist environment can speed up the fungus growth. Individuals with a weak immune systems, such as diabetic patients and elderly people, are more susceptible to toenail fungus.

Hours
By Appointment only.